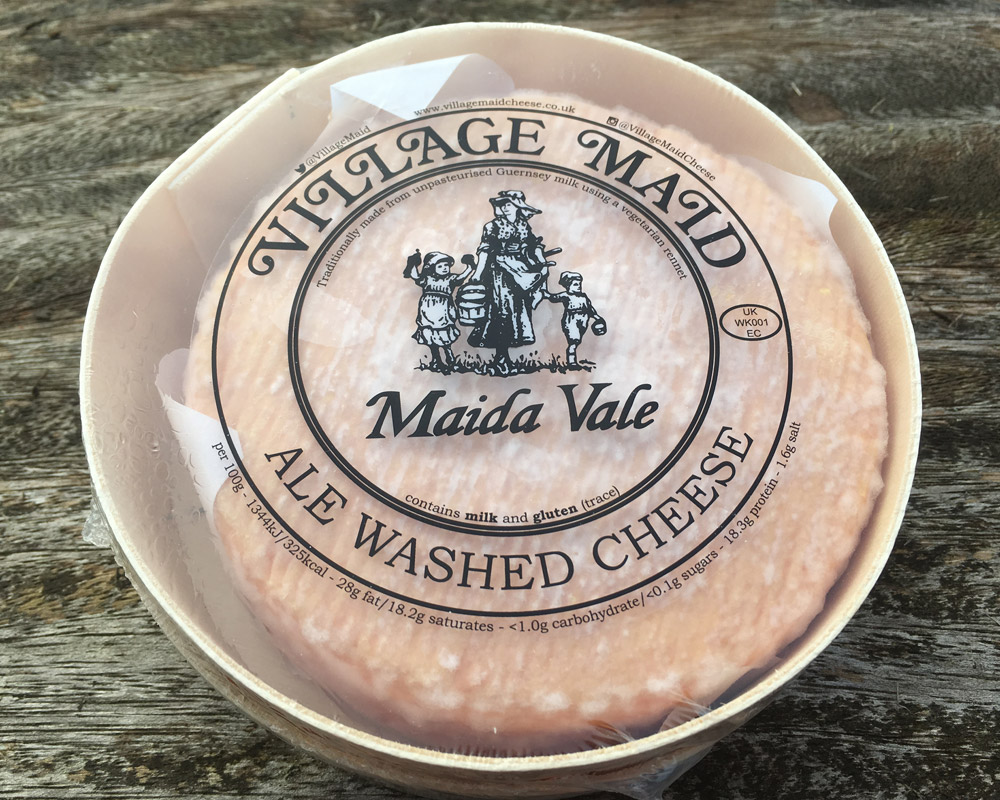 Maida Vale is a brie style cheese that is washed with an Indian Pale Ale. Washing the cheese with the ale produces a tangy, washed-rind flavour with hints of hoppy IPA coming through.

This is a soft creamy cheese that is washed in ale during its maturation period. Maida Vale begins its life in much the same way as Waterloo (a soft cows’ milk cheese made at the same dairy in Berkshire). It is made using Guernsey milk and then washed in an Indian Pale Ale called Soundwave, made by the Siren Craft Brewery which is just 6 miles from the Village Maid Dairy. The Guernsey milk used in the cheesemaking makes Maida Vale rich, buttery and creamy whereas the ale washing gives it a really tangy twist. Washing a cheese in alcohol or brine changes its whole nature and causes the cheese to take on all sorts of unique characteristics.

Anne Wigmore set up Village Maid Cheese in the mid 1980s having previously worked as a microbiologist at the National Institute for Research in Dairying. She had developed a passion for cheesemaking whilst at the Institute and a love of Italian sheep’s milk cheese (Pecorino) whilst travelling in Sardinia. Working out of a small purpose-built unit in her garden she began experimenting in order to produce a sheep’s milk cheese of her own. To begin with Anne and her husband Andy just made a hard sheep’s cheese (Spenwood) but were soon branching out to make Wigmore and Waterloo. More recently they have been joined in the business by their son Jake and his partner, Kayleigh. It is Jake and Kayleigh who developed the fourth cheese made by the Wigmores, Maida Vale.

We visit the Village Maid dairy every 2 weeks to buy our cheese direct from them. This means that we have the opportunity to chat to the cheesemakers and find out what their plans are for the future.

Maida Vale can be paired with an Indian Pale Ale to match the flavours in the cheese but try it also with a Chardonnay, the dryness of the wine really offsets the pungent flavour of the cheese.