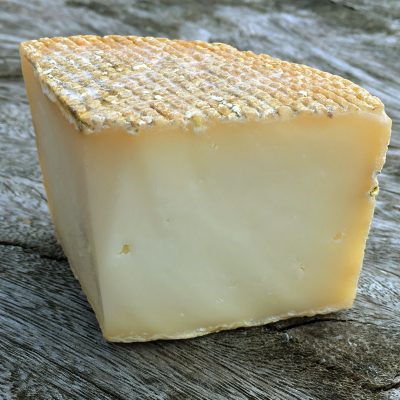 Winner of the British Cheese Awards in 2018 Sheep Rustler is a hard sheep’s milk cheese. It is full of flavours which linger in the mouth. One of our favourites!

This is a hard sheep’s milk cheese which has been aged to around 3 months old. It has a colourful orangery brown rind and a medium, mellow, nutty flavour with hints of caramel. The cheese itself gets its name from Russell who was the cheesemaker who made the very first batch of Sheep Rustler!

The cheesemakers (White Lake Cheese) are based just outside Glastonbury and we go down to see them once a month and buy our cheeses direct from them. This means that we get to meet the team behind their cheeses and hear all their news.

White Lake Cheese began producing cheeses in 2004. They are one of the most successful artisan cheesemakers in the UK with almost all of their cheeses scooping awards. They are the first (and only) cheesemakers to have won the title of Supreme Champion at the British Cheese Awards on three consecutive years with three different cheeses. Alongside making great cheeses, White Lake are busy making sure that their dairy is as environmentally friendly as possible. They have installed solar panels wherever possible and are beginning to grow their own fuel for their boiler.

This cheese is similar in style to an Italian pecorino (sheep‘s milk cheese) and as such pairs beautifully with an Italian Chianti.