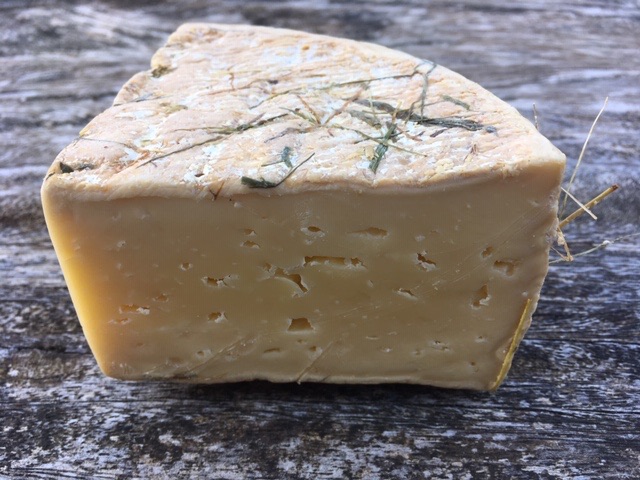 Witheridge is an organic cheese which is uniquely matured in hay. The hay gives the cheese a fabulous sweetness, with savoury and fruity undertones.

The cheesemaker, Rose Grimmond, thinks that Witheridge is the first UK produced cheese to be matured in hay. The hay for the cheese is grown in a specific field which has been sown with fragrant grasses. This means that as the seasons change, the cheese has subtle differences in flavour. We list the Witheridge as a hard cheese but it’s texture is supple and creamy.

The cheese itself is named after a local landmark, Witheridge Hill. It has won various awards including scooping 3 stars in the Guild of Fine Food’s Great Taste Awards.

The Nettlebed Creamery was founded by Rose in 2015. We go to the dairy every couple of weeks to buy our cheeses directly from Rose and her team. The milk for the cheese comes from Rose’s family farm, Merrimoles. The farm covers an impressive 2000 acres around the villages of Bix and Nettlebed in South Oxfordshire, where it is run by Rose’s mother and aunt who are nieces of Ian Fleming! It has been in their family for more than 100 years and is home to a herd of 130 cows which are a mixture of Holstein Friesians, Swedish Red and Montbeliardes. The farm is completely organic and Rose believes that the quality of the pastures as well as the quality of the cows are the reason why Witheridge has been so successful.

We also feature 2 other cheeses from the Nettlebed Creamery in our counter. The Bix and Highmoor are just as good as the Witheridge!

Try pairing Witheridge with a glass of a crisp white wine such as Pinot Grigio.