Sparkenhoe Blue is made in Leicestershire by Will Clarke. Will’s parents, Jo and David, have been making cheese on their farm since 2005 but had previously concentrated on making a traditional farmhouse Red Leicester. They decided to branch out into making a blue cheese and set Will the challenge of creating it. A new dairy was built on the farm to ensure that the blue cheese making didn’t interfere with the already produced Red Leicester. Originally they had planned on pasteurising the milk so that it could be labelled as Blue Stilton. However, the unpasteurised cheese has proven to be so popular that they have kept it. Hence the name, Sparkenhoe Blue (Sparkenhoe is the name of the family farm).

Like the Colston Bassett Blue Stilton PDO, Sparkenhoe Blue is hand ladled into moulds which gives the cheese a creamy consistency. The taste of the cheese is slightly stronger than that of other English blues. However it has the perfect balance of flavour with savoury notes.

Perfect for eating during the cold winter months, this cheese pairs beautifully with a rich sloe gin. 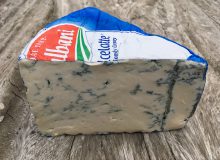