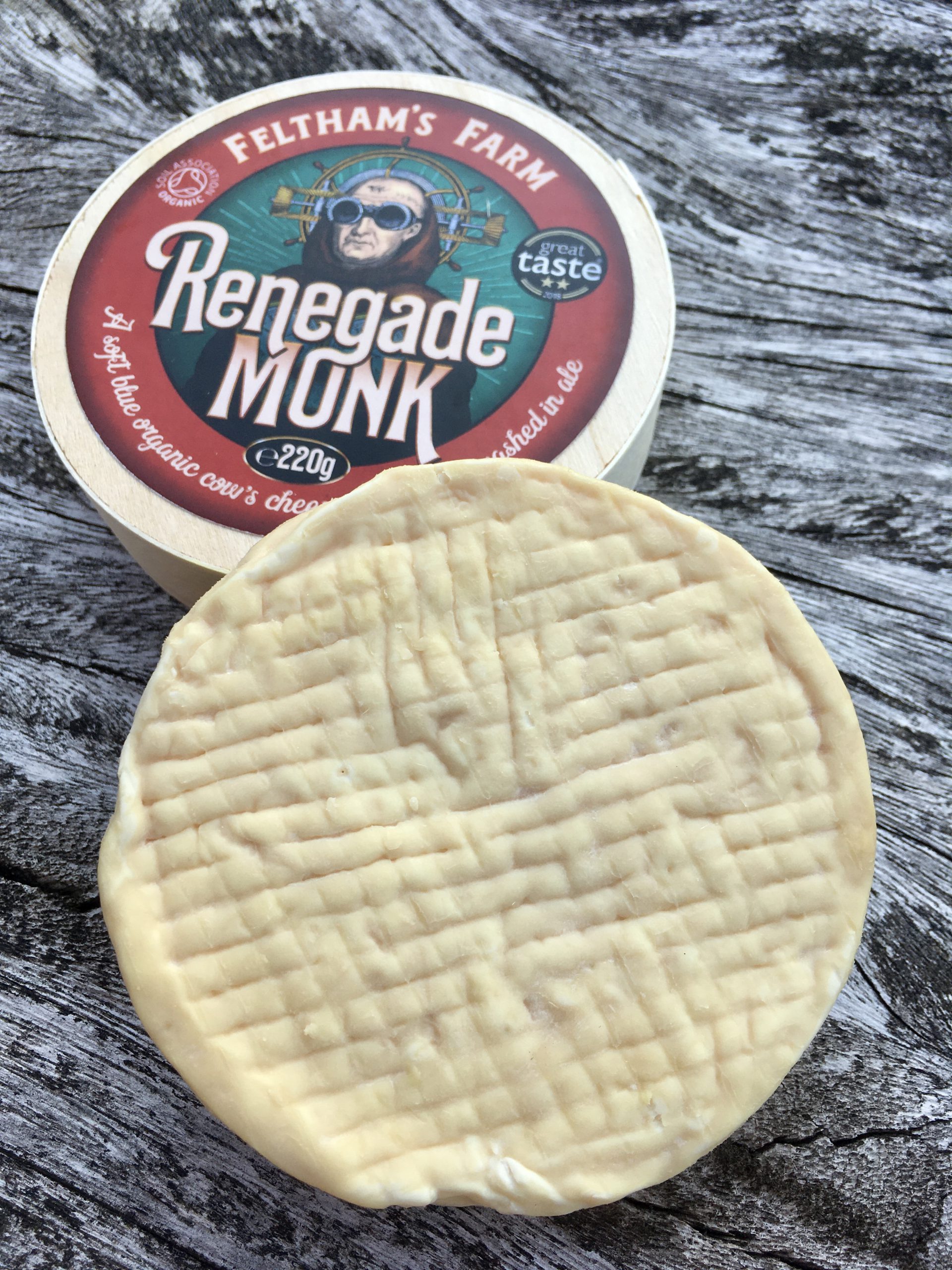 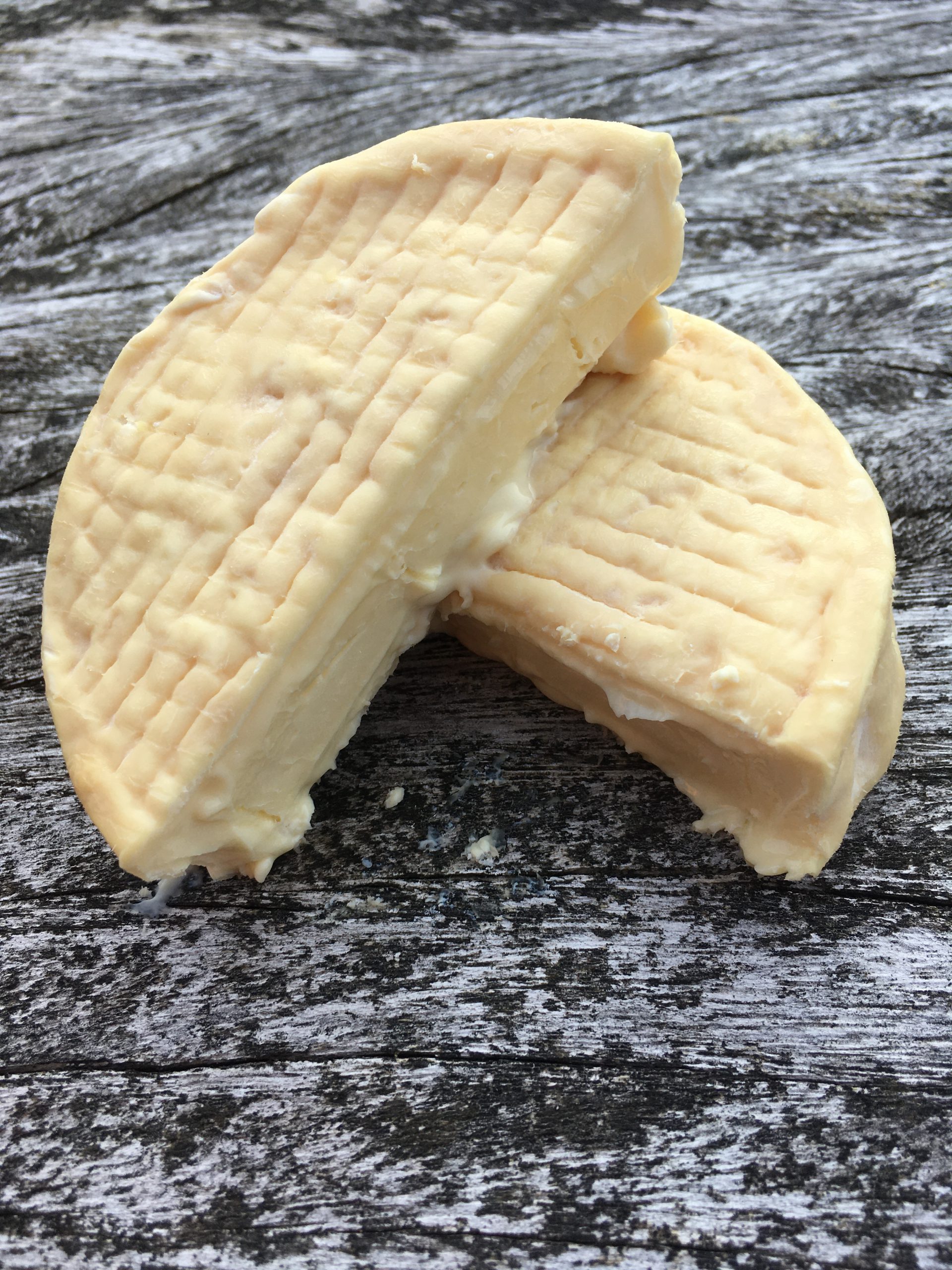 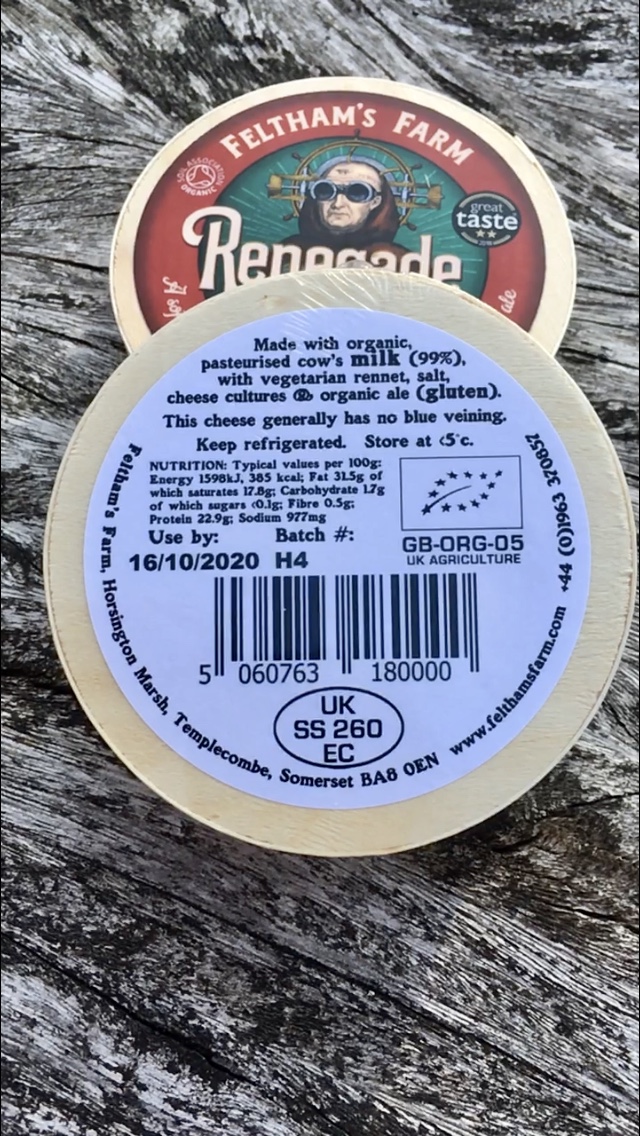 Renegade Monk is 220g of soft, smelly cheesy heaven! This ale washed cheese might be a mild blue but when combined with its oozing creaminess and pungent aroma you definitely won’t be disappointed.

Renegade Monk is (quite possibly) the smelliest cheese in our counter! It’s an organic, washed rind blue cheese which is an unusual fusion of tastes. The cheesemaker washes the cheese in Funky Monkey (a local ale) every few days for up to 4 weeks, at which point the cheese is ready to eat. Washing the rind of a cheese changes how it matures. Usually a soft cheese will develop a white rind whereas a washed rind cheese will generally take on an orange/golden colour.

Feltham’s Farm is the home of Marcus Fergusson and Penny Nagle who moved there with their children in the mid 2010s. Marcus is passionate about cheese and wanted to create a cheese that was completely unique. It’s fair to say that he has well and truly achieved his goal.

But why call the cheese Renegade Monk?

The cheese is a hybrid of a soft white cheese, a blue cheese and a washed rind cheese. There are many who can’t get their heads around this combination hence the Renegade part of the name. Medieval monks experimented endlessly with different types of milk, cheese making practices and ageing processes. It was these Franciscan Monks who first came up with the idea of washing their cheeses as it made them more substantial. This was important whilst they were fasting during Lent. The Monk part of Renegade Monk is a homage to these ancient traditions. The name is also a reflection of the fact that Felthams’ Farm is sited on ancient Templar land. The Knights Templar were considered the first Renegade Monks.

Renegade Monk has won many awards in its short lifetime from Silver and Gold Medals at the World Cheese Awards, Golds at the Global Cheese Awards and most recently in 2020 it won the Supreme Champion at the inaugural Virtual Cheese Awards.

Try pairing Renegade Monk with a glass of Sauternes. If you’re up for something a bit different it is wonderful with a cup of Earl Grey Tea…